The terms end times, end of days, last days all have slightly different biblical meanings. Some scholars would say certain passages refer to the Church and others to Israel. In his article we will address the more popular meaning that applies to the general time period that will occur before Jesus’ return.The very idea of someone saying that we may be living in the LAST DAYS, with the END of our world as we know it, brings to mind the image so often illustrated on television and even in the comics section of the newspaper, -that of a wild-eyed fanatic standing on a city street corner holding a sign saying, -“THE END-TIME HAS COME!” He is usually depicted as a mentally ill man with unkept long hair and beard, and wearing a robe and sandals. And he is often called a “DOOMSDAY PROPHET.”

But today serious world leaders and scientists are saying foreboding things about the current drift in world conditions. And a few years ago they developed a “DOOMSDAY CLOCK” themselves. When the clock would strike midnight the world would have set in motion irreversible events that would ultimately bring destruction upon the earth. [1]

Jesus set the guidelines for the end times when He and his disciples were touring the Temple buildings in Jerusalem. The disciples wanted to know if their Teacher was as impressed as they by the Temple. The Lord shocked them by saying “…Do you not see all these things? Assuredly, I say to you, not one stone shall be left here upon another, that shall not be thrown down.” (Mat 24:2)

Of course, the prediction of such a calamitous event caused the disciples to ask for more details. “When shall these things be? and what shall be the sign of thy coming, and the end of the world?” (Mat 24:3)

Jesus gave them a long list of signs that would indicate when mankind had entered the end times. “And Jesus answered and said unto them, Take heed that no man deceive you. For many shall come in my name, saying, I am Christ; and shall deceive many. And ye shall hear of wars and rumours of wars: see that ye be not troubled: for all these things must come to pass, but the end is not yet. For nation shall rise against nation, and kingdom against kingdom: and there shall be famines, and pestilences, and earthquakes, in divers places. All these are the beginning of sorrows.” (Mat 24:4-8)

Here is a handy list of 44 prophecies that warns of the end times: 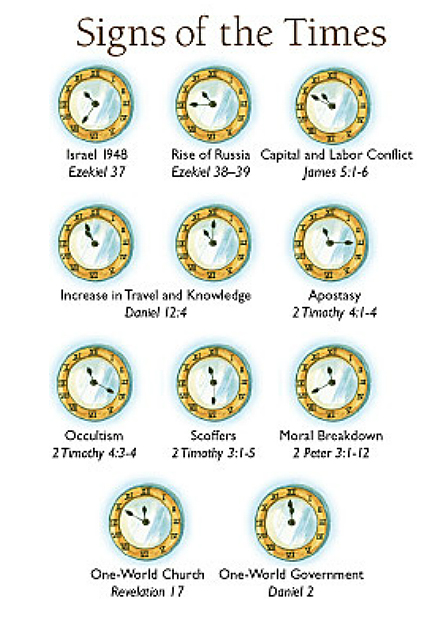 There are two key indicators of the of the end times that stands out from the rest. The first one is apostasy. The Bible clearly teaches that society will degenerate in the end times, becoming as evil as it was in the days of Noah (Matthew 24:37-39). The Apostle Paul, speaking as a prophet, says that society will descend into a black pit of immorality, violence, and paganism (2 Timothy 3:1-5). He asserts that men will be “lovers of self, lovers of money, and lovers of pleasure.” People will be “boastful, arrogant, and unholy,” and children will be “disobedient to parents.” Sounds like the evening news, doesn’t it? In short, we have arrived. [3]The second key end-time sign is the founding of the nation of Israel. On May 14, 1948, against all human reasoning, a nation that had been dead for nineteen hundred years suddenly came back to life. On that day the world unknowingly took a giant step closer to the end of the age, for Israel became a self-governing nation just as the prophets had foretold. [4]

Israel is so important to prophecy, many prophecy watchers have pointed to the birth of the Jewish state as the starting point of the end times. Other folks have pointed to Israel as a key component of a time window that calls for all prophecy to be fulfilled within the lifetime of a generation.

“Assuredly, I say to you, this generation will by no means pass away till all these things take place” (Matthew 24:34).

There are many Christians who are unmoved by the warning signs. They often have scorn for anyone who actively promotes Bible prophecy. Here is what a man named James posted on his site:

“This fear has spawned, among other things, an entire industry of books similar to those of Mr. Lindsey. In general, these books, as well as the movies, magazines, radio and TV programs, and websites inspired by them, have the ability to whip believers into a frenzy about the coming of the Antichrist, leading to speculation about such things as his identity, the identity of the nations which will be under his control, and the identity of the False Prophet, the Mark of the Beast, the identity of Babylon, and of course, the Rapture.” He reinsured his readers by quoting Matthew 24:6 “. . but see to it that you are not alarmed.” [5]

The Bible does says we are not to be alarmed, but it doesn’t say we should just roll over and ignore it. Because apathy is a major sign of the end times, Christians who say don’t worry about the end times are actually taking an active role in prophecy. Jesus did not say, “In case your interest about the end times..” He said, “Watch therefore..” (Mat 24:44)