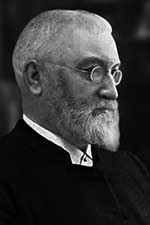 Ethelbert William Bullinger was born on December 15, 1837 in Canterbury, England. Educated at King’s College, London, he was noted broadly for three works: A Critical Lexicon and Concordance to the English and Greek New Testament (1877); for his ground-breaking and exhaustive work on Figures of Speech Used in the Bible (1898); and as the primary editor of The Companion Bible (published in 6 parts, beginning in 1909; The Archbishop of Canterbury granted him an honorary Doctor of Divinity degree in 1881 in recognition of his biblical scholarship.

1 – A Refreshing Study On The Resurrection
2 – Christ In The Separate Books Of The Word
3 – Crucified with Christ
4 – Right Division
5 – Stablished — Strengthened — Settled
6 – The Christian’s Greatest Need
7 – The Foundations Of Dispensational Truth
8 – The Ground is Thirsty
9 – The Names of Jesus
10 – The One Great Subject of the Word
11 – The Resurrection Of The Body
12 – They Sang His Praise. They Soon Forgot His Works