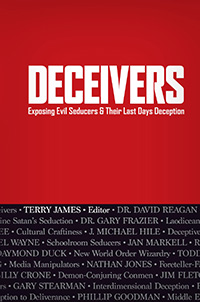 This book brings 15 of today’s most recognized experts in Bible prophecy together to analyze the first prophetic sign Jesus gave to look for as His second coming approaches.

Names like Jan Markell, Dr. David Reagan, Dr. Gary Frazier, Gary Stearman, and many other writers, broadcasters, and nationally known speakers contribute profound insights through Holy Spirit-Given discernment.  The authors combine to produce a most relevant and fascinating exploration into just how near this generation is to Christ’s sudden intervention into the affairs of mankind.

Can there be any doubt that this generation is under assault by deceivers of every sort? The deception being perpetrated in government and politics today would be more than enough to say we are suffocating in lies, seduction and deception each and every hour. But far beyond that deception taking place in each and every news cycle, religionists, in the name of Christendom, lie through false doctrine, and the false teaching that the Church has replaced Israel in God’s Prophetic Plan.

Souls are being seduced into falling for the satanic deception that there are many ways to God and Heaven. The present Catholic pope leads the way in this hellish doctrine of devils.

Media, in all their forms –news, entertainment, social media venues– all observably run counter to God’s Will for conducting life on the planet he created. Deceivers lead the way in corrupting the young, in tearing apart America’s moral fiber, in perverting every family principle established by the One Who Created the human race.

Jesus, the greatest of all prophets, as well as Creator of everything that is, began by forewarning of the deceivers that will mark the end of days. The Lord promised that when this prophetic indicator, followed by the many others He gave, begin to come on the scene, His coming will be very near indeed.

Authors in Deceivers: Exposing Evil Seducers and Last Days Deception prove through scripture and the issues and events of our time why ours is likely the last generation of the Age of Grace. –Why Christ’s coming for the Church in the Rapture is even at the door!

“Deceivers is a book that will capture your attention right away. Have you ever stopped to think about the subtle tactics of the enemy? Ever considered the ways that the Enemy has infiltrated the world we live in – maybe even in our lives? The introduction of the book states “We believe that stage-setting for Christ’s Olivet prophecy about deceivers and deception is on the front burner of life today. It is altogether fitting, therefore, to assess this particular end-times signal in ascertaining where we might stand on God’s prophetic timeline. The pages following this compelling introduction are filled with the subtle ways that Satan is showing up in every arena of life – tiny deceptions, lies that are mixed with divine truths, slights of hands that make us question the foundations of faith we once so staunchly believed in. The enemy is a master of deception, a master of twisting the truth. He is the ultimate one to make us question the goodness of God and in that question causing us to accept less than what God has in store for us.”

“Christians are being deceived and don’t realize it. This book names names and points out various doctrines that are false, that God’s people are falling for. Reveals why we must put on the whole armour of God to be able to discern the truth from the lie”

“Every Christian NEEDS to read this book and then, buy more to give away to family, friends, neighbors and in their church. This book with many authors are sounding the trumpet for those who have ears to hear about the prophecy being fulfilled before our eyes. They help you to understand the how and why of what is taking place in America and around the world, showing all the parts of the puzzle are coming together as God has said would happen in the last days.”