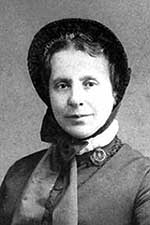 Catharine Booth, the daughter of a coachbuilder, was born in England, in 1829. She was the wife of the famed William Booth, founder of the Salvation Army. Not until 1860 did Catherine Booth first start to preach. One day in Gateshead Bethseda Chapel, a strange compulsion seized her and she felt she must rise and speak. Later she recalled how an inner voice taunted her: “You will look like a fool and have nothing to say.” Catherine decided that this was the Devil’s voice: “That’s just the point,” she retorted, “I have never yet been willing to be a fool for Christ. Now I will be one.”

LECTURE 1 – Its False Christs Compared With The Christ Of God

LECTURE 2 – Its Mock Salvation vs. A Real Deliverance From Sin

LECTURE 3 – Its Sham Compassion vs. The Dying Love Of Christ

LECTURE 4 – Its Cowardly Service vs. The Real Warfare