Note from Jan: Some weeks ago now videos and photos appeared online of a mysterious ceremony dedicating the Gotthard Base Tunnel in Switzerland. It is 35 miles long beneath a mountain and connects several European nations.

We have already seen the bizarre at Super Bowl half-time programs and the Olympics. But this lengthy presentation filmed for millions to see is the new gold standard in defining the weird, dark, and debauched.

This ministry has warned that evil is waxing worse and worse (II Timothy 3:13) for a long time. With that in mind, I asked occult expert Jill Martin Rische to help us understand what happened just over a month ago. Thanks to the Internet, very little is hidden any longer. It is now hiding in plain sight. Antichrist’s kingdom is gearing up.

Indeed, we wrestle against the powers of this present darkness. We encourage you to put on the full armor of God every day. The rulers of darkness are busy. (See Ephesians 6.)

Jill Martin Rische is the daughter of the late Dr. Walter Martin and is on the staff of Olive Tree Ministries.

We live in a supernatural world dominated by a focused, intelligent evil. It knows humanity quite well, fighting us century after century. In this kind of spiritual warfare, humans are at a disadvantage, unless they belong to someone far greater. (1 John 4:4)

Sir Arthur Conan Doyle, creator of Sherlock Holmes, was one of the more famous promoters of this evil. He wrote of séances where ghost-like hands turned the pages of a Bible, pointing to verses like John 20:29, “Blessed are they that have not seen, and yet have believed.” This is what evil does best — deceive. It plots and plans, often hiding in plain sight.

The evidence of evil’s power and presence is everywhere today

Satan is a clever opponent, frequently disguising himself as something harmless or even good — who would go near him if he did not? We don’t have to look far to find his influence today.

Switzerland recently opened its Gotthard Base Tunnel to world acclaim. It is 35 miles of railway running deep inside a 7,000-foot mountain. It took seventeen years and nine deaths to build the first flat route ever through the Alps, directly linking Switzerland to Germany, France, and Italy. It is a transportation powerhouse, providing the means to resettle untraceable thousands of refugees in the heart of Europe.

French newspapers called the tunnel itself a “cathedral” and a “hyphen” between Switzerland and Europe. The celebration, set on an international EU stage, featured a shock and awe ceremony that included demons, the horned goat-man Krampus, a Swiss pagan goddess called Percht, and x-rated dance choreography. The $8 million production featured many actors dressed as transvestites and prostitutes. It was definitely not family entertainment.The ceremony lasted about six hours.

The ceremony began with dancers wearing orange coveralls worn by the miners, marching in military formation like zombies — mindless in death. It continued with a pantomime of human sacrifice to the tunnel as miners then transformed into spirits, symbolized by partially nude dancers wearing white underwear and veils. 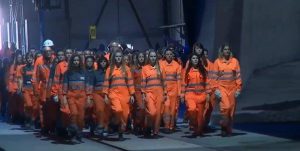 A goat man with long horns, identified with a demon-like being known in Swiss tradition as Krampus, leaped screaming onto the stage and began a dance ritual of mating with and then consuming the spirits of the dead.

This led to a scene detailing what appeared to be pagan nature worship, with actors dressed in black wearing plants and even nests on their heads. As the dancers groped and kissed each other, the goat man appeared on a giant screen behind them, surrounded by flames and three Egyptian scarab-beetles representing the god Ra.

Flying on wires over the dancers was a topless trans-like woman with large, white wings, representing the Swiss goddess Percht. A fake plastic lamb — in essence, dead — was carried around the stage while a woman holding a small wooden cross faded into the background. At the end of the ceremony, the goat man was resurrected and worshiped.

Perhaps the world leaders on the sidelines were beaming as this represented European unity as the continent comes apart. Or maybe they are seeing shades of the coming globalism they so long for.

All this obscenity was justified because Swiss history featured the occult until the rise of Christianity in Europe about 300 AD. Pagan practices ruled the German-Swiss villages along the Devil’s bridge, as it was called, spinning the legend of a deal with the devil. If he would build a bridge across an impassable gorge, the villagers would give him one soul — the first person to cross the bridge.

In the end, though, the first living thing to cross was a goat and Satan was prevented from destroying the villages by one woman carrying a wooden cross.

Good triumphed over evil, but Swiss leaders focused on Satan and missed the biggest story of all: The transformation of Switzerland from a pagan haven to a largely Christian nation through the hard work of missionaries and reformers like Ulrich Zwingli.

The Gotthard trail at the bottom of the mountain was even renamed for pious Anglo-German bishop St. Gotehard of Hildesheim (1000 AD). It became known in the Middle Ages as the People’s Route, a mule path linking France to Italy on a Pilgrim road to the Levant and Jerusalem.

Swiss tradition tells of the strength of God and the defeat of a far weaker Satan, but whoever made the final decision on the Gotthard Base Tunnel ceremony buried the truth. Almost two thousand years of God’s transformative power was edited out of Swiss history.

There is light at the end of the tunnel

Governments may breed evil and people betray us — this is the sadness of sin.

Evil is bolder than ever before today and it appears stronger, but the truth is that it is still the weaker power — still just a creation and never the Creator. Jesus defeated it on the cross a very long time ago.

Note from Jan: Europe threw God out decades ago. The consequences of this action are incalculable. Now Europe celebrates a ceremony laced with the occult, darkness, and death. And it has no hope!

America is heading down the same secular path. The church remains to be salt and light but when it is removed at the Rapture, all nations will look like this ceremony. If you are a child of the King, rejoice that this world is not your home.

Find out more information about Jill Martin Rische and her outstanding encyclopedia on the occult titled “The Kingdom of the Occult” at www.waltermartin.com.

View 5 minutes of the six-hour ceremony. This is not suitable for children. Longer versions are available on YouTube but put on the full armor of God before viewing.