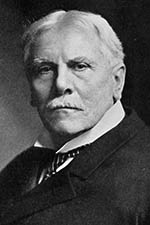 Cyrus Ingerson Scofield (1843-1921), Bible student and author, was born in Lenawee County, Michigan, reared in Wilson County, Tennessee, and privately educated. Converted at 36, he was ordained to the congregational ministry in 1882, and served as pastor of the First Church, Dallas, Texas (1882-1895), and again (1902-1907); and of the Moody Church, Northfield, Massachusetts (1895-1902). He spent his later years lecturing on biblical subjects on both sides of the Atlantic. The work for which he is best remembered is his 1909 dispensational premillennial Scofield Reference Bible.

Rightly Dividing the Word of Truth