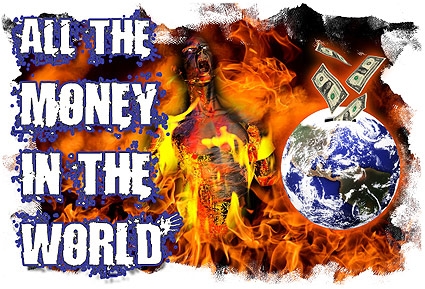 What is the value of money? I was once visiting my brother and playing around with my nephew, age 2, and my niece, age 3. As a joke, I offered them a choice between a $50 bill and a piece of candy. Despite my effort to explain the value of money and some urging from their father, the candy remained their only choice.

Their ignorance of the value of money did not last long. By the time they were 5 years old, their view of money had completely changed. When I visited them at that age, the question was, “Uncle Todd, can I have a dollar?”

One of the first lessons we learn in life is that money equals material fulfillment. We judge the worth of everything by its cash value. Some folks are able to price their needs by proclaiming, “If I only had a million dollars, I’d finally be happy.”

America is the most prosperous nation on earth, yet less than one-third of its citizens say they are not really happy. Money can buy us luxury goods and a better lifestyle, but it cannot purchase satisfaction.

It is basic to human nature to fall into the financial trap of comparing yourself to others. We will always have friends who have more money than we do. In a wealth pyramid, you can only have a few people on top. If everyone had a pile of money, there would be no rich people.

A poll was conducted to judge people’s happiness quotient. Individuals were given two choices: a $100,000 gift that all their contemporaries received, or a $50,000 gift for them alone. Inexplicably, an overwhelming majority opted for the lesser amount. Data shows that what matters on the happiness front is not just how much money you have, but whether you have more of it than those around you. Nobody wants to be in a race where everyone crosses the finish line at the same time. If it’s essential that we finish first every time, we’re going to live a life of frustration.

Death can be very good for a celebrity’s bottom line. When Michael Jackson died on June 25, 2009, his estate was on the verge of bankruptcy from more than $500 million in debt. Within a year of his death, Jackson’s finances had completely turned around. Revenue came pouring in from nostalgia, film, and record sales. Sony Music said more than 40 million Jackson albums have sold worldwide since he died–a stratospheric number for a music industry in decline.

The estate has earned more than $250 million. Executors used some of that to pay off $70 million in debt, including the $5-million mortgage on the Jackson family compound in Encino. Several other lucrative projects are in the works. There is a deal with Cirque de Soleil for shows inspired by Jackson’s music, in which the estate will share half the costs and profits when the performances begin in late 2011.

The greatest sign of improvement in Jackson’s estate is the understanding of how much money is owed to creditors. Several people have been paid for overdue bills after spending years trying to track the singer down. Others who haven’t yet been paid say they have been treated professionally by the estate; a night and day change from his old regime.

It is bit strange for us to be talking as if Michael Jackson has finally turned his finances around. No one is sending the singer income statements. I would argue that the real Michael Jackson is now penniless, and what status he may have in the afterlife is judged by a standard that has nothing to do with fiat wealth.

One of the big drawbacks of wealth is how easily it can come and go. The more I study the business world, the more convinced I am that luck is the driving force behind most fortunes.

One of the most common misconceptions about celebrities is the belief that anyone who finds success in a Hollywood production is automatically wealthy. Actors are well paid for their work, but only a few reach the point where they can demand millions of dollars to sign their name to a contract.

The actors in the 1960s Star Trek series were living proof of this reality. William Shatner, who played Captain James T. Kirk, had a good income for three years, but when the show was cancelled, he had to struggle to get by.

Nobody wanted to hire him because he was so strongly connected to his Star Trek role. With very little money coming in, he was reduced to living in a truck bed camper in the San Fernando Valley. Shatner refers to this part of his life as “that period,” a humbling point where he would do trade shows or small party appearances to earn a living.

By the end the 1970s, Shatner’s financial situation had turned around. Star Trek had become a phenomenon within popular culture, with cast members in high demand at  Trekkie conventions. The phenomenal success of Star Wars led Paramount Pictures to develop a motion picture. The movie was very successful and led to a franchise of five films.

In 1998, Shatner agreed to become the official spokesperson for Priceline.comin exchange for stock in the company. The deal made him an instant millions when it went public in the dot-com boom.

There are several claims that Shatner has become a billionaire from his Priceline.com stock. Unfortunately, there are several factors that people fail to take into account. Because he had restricted shares, he was barred from selling his shares until after the boom, and turned a bust. SEC filings show he sold most of his holdings when Priceline was about $6 per share. Since stocks have a target price for a limited time period, much of  Shatner’s warrants may have expired worthless.

He was once on the Charlie Rose show and gave a general outline of what happened with his stock options:

“It’s all by guess and by golly, anyway. And I guessed right. So I watched Priceline.com go roaring from pennies to $150, and I thinking, ‘I’m rich! I’m rich! In a year and a half I’ll be rich! In six months I’ll be rich!’ Then in three months, I’m less rich. In two months, I’m not rich. In one month, it was less money than it had started out. It had gone up and down in that dot-com bust. So it was money I never had that I lost.”

Anyone who hopes to become wealthy in a business venture must realize the odds are stacked against them. Data from the U.S. Bureau of Labor Statistics suggests only 44 percent of business will survive more than five years, and only 5 percent will become large enough to make their own wealth.

A lot of people who beat the odds don’t know when to quit. They achieve great success in one business and then go back to gambling and bet their fortune on a new venture. In most cases, their new bit fails to pan out.

John DeLorean is one such example. He was a professional engineer and executive in the U.S. automobile industry. In 1965, at age 40, he broke the record for being the youngest division head at GM when he took over at Pontiac. DeLorean is almost solely credited for the success of the “first muscle car.”

In 1969, DeLorean was promoted to head the prestigious Chevrolet division, General Motors’ flagship brand. His annual income was around $600,000. His growing fame led to a jet-setting lifestyle, which allowed him to hang out with business and entertainment celebrities. He was friends with James T. Aubrey, president of Metro-Goldwyn-Mayer Studios, Sammy Davis Jr., and The Tonight Show host Johnny Carson.

By the time 1972 arrived, DeLorean had risen to the position of vice president of car and truck production for the entire General Motors line, and he seemed to have a lock on eventually becoming the CEO of the corporation. Instead, DeLorean quit in April 1973 to form his own company, the DeLorean Motor Company.

Starting your own automobile company is a very tall order. It takes vast amounts of money and years of development. DeLorean received seed money from the Northern Ireland Development Agency, allowing him to build the manufacturing plant for the first car in Dunmurry, Northern Ireland.

The factory started manufacturing cars in early 1981, but the company was in receivership by February 1982. The plant turned out around 3,000 cars per year, but it needed a production run of 6,000 units just to break even. The poor economy of the early 1980s only made profitability all the more unlikely.

In a desperate bid to save his company, DeLorean became involved with a drug smuggler, who had offered him a payment in exchange for using the company to launder drug money. The drug dealer was actually an FBI informant who part of a sting operation. DeLorean successfully defended himself against the drug charges by claiming entrapment, but his auto firm was history. Seeing only an endless river of red ink, the British government ordered its closure in November 1982.

DeLorean was involved in over forty legal battles since the collapse of DeLorean Motor Company. In 1999, he declared personal bankruptcy to escape a debt load of $85 million owed to 266 creditors.

Investing in the Kingdom of God

One of the key reasons I became involved in Bible prophecy is a realization that end-time events will eventually take priority over all other aspects of our lives. If you are a believer in Jesus Christ, someday the Rapture may suddenly transport you into the glory of heaven. If you are a nonbeliever, you may live to see the near-total destruction of everything that man has built on earth.

The Bible warns us not to store our wealth here on earth. The reason is simple–money has no lasting value. It’s like having your savings in the currency of a third-world nation with a high inflation rate. In a few years, the money is made worthless by hyperinflation.

When we leave this world, the only thing we will take with us is whatever we have done to give honor to the Lord Jesus. I think many Christians will be shocked at what a limited amount of treasure they have stored up in their heavenly accounts.

The hardest part about doing something for the kingdom of God is getting started. I’ve learned from years of personal experience that over 90 percent of believers will never do anything productive for the Lord’s work. If we are truly Rapture ready, we have to be prepared to stand before the throne of God and say, “Master, this is what I’ve done….”

“For we must all appear before the judgment seat of Christ; that every one may receive the things done in his body, according to that he hath done, whether it be good or bad” (2 Corinthians 5:10).