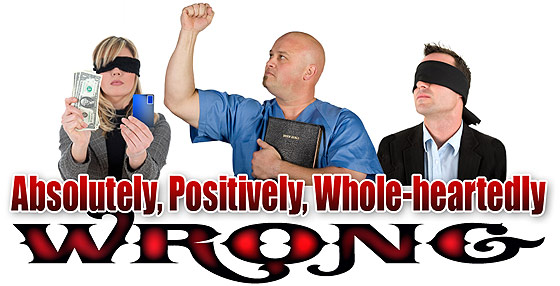 A man walks into a crowded market in downtown Baghdad with fifty pounds of high explosives strapped to his body. All around are women and children, as well as grown men, buying and selling produce. The man positions himself in the most congested area of the market and then reaches into his pocket, pressing a detonator that triggers a huge blast. Dozens of people are killed, obviously including the bomber.

The question here is not why this man carried out this heinous act. He obviously thought that killing himself and committing mass murder were in his best interest. The question is: What motivated him to make such a momentous decision?

One of the fundamental rules of nature is that you don’t needlessly sacrifice your own life, and you don’t kill non-combatants like women and children. We’ve all seen enough news reports on Islamic extremists who seem to have no trouble breaching this barrier.

Every day, I receive emails from people who are on their own kamikaze missions. They present me with views that they absolutely, positively, whole-heartedly believe in—but as far as I can tell, they are totally wrong.

One of the problems with having free will is that we get to decide what truth is. The world presents us with options about what to believe, and we select the views we are going to hold to.

The fact that we strongly dedicate ourselves to believing something doesn’t make it true. When people say that something is “true for them,” all they mean is that they believe the thing without having to justify it.

Truth does not conform to assumption or desire; it is bound by an unbiased assessment of all available facts. Belief, on the other hand, is free thought—it can be fact or fiction; it is often fantasy or desire.

Johann Goethe, the 18th-century German novelist and scientist, wrote: “It is easier to perceive error than to find truth, for the former lies on the surface and is easily seen, while the latter lies in the depth, where few are willing to search for it.”

The fallen nature of man constantly seeks to distort the truth. We see this tendency in our children. There is a new thought among researchers that children can and will tell deliberate lies by age 4, or perhaps even earlier. However, until age 8, most children cannot distinguish between a deliberate false statement and an unintentional one, but they do know that it is wrong to try to mislead someone. (“Would a child lie?” by Paul Ekman, in Psychology Today, July/August, 1989, 62-65.)

Far too often, people look for a consensus to determine the truth. The thinking is that if a majority believes something, then it must be the case.

The problem is that the human mind is prone to wishful thinking. People will hold to assertion in the face of overwhelming evidence and facts to the contrary.

For centuries, the majority of the people of earth believed that their destinies were determined by astrological mechanisms. I don’t believe in astrology because I know various objects in space have no jurisdiction over my life.

We all know that the gods of ancient Greece are fables. Back in the day, nearly everyone in the city of Athens revered Athena, the goddess of heroic endeavors. She was the city’s patron, and it was punishable by death to defame her. If we lived in first millennium B.C. Athens, we would probably find ourselves drawn into believing this falsehood.

The followers of the Islamic faith believe their deity is the superior to the God of the Bible. The adherence to Islam is largely the result of compulsory guidelines set by society. Every nation with a majority of Muslim believers has a margin higher than 90 percent. If the members of a Muslim nation want to find the true creator of the universe, they need to step beyond the social barriers that bar them from the truth.

Jesus warned that man is a poor guide for those seeking truth. “Let them alone: they be blind leaders of the blind. And if the blind lead the blind, both shall fall into the ditch” (Matthew 15:14).

Truth Must Have Value

The ability to find truth is based on how much value we place on it. All people want truth, but they also want reality to agree with them. Unless we are willing to let the chips fall where they may, the truth will elude us.

Truth requires a strong character of integrity. A person of integrity seeks to use the truth to eliminate error and falsehood. “To love integrity means to use truth to eliminate error and falsehood from the world . . .To love truth is to be truthful in such a way that people will learn to trust us . . .To love others is to use truth to serve them and not ourselves.” (“To be perfectly honest . . .” by Calvin Miller, Moody, March 1987, 16-19.)

Another thing that makes truth important is the realization that there is always a special witness watching over them. When Scottish theologian John Baillie taught at Edinburgh University, he made it a practice to open his course on the doctrine of God with these words: “We must remember, in discussing God that we cannot talk about Him without His hearing every word we say. We may be able to talk about others behind their backs, but God is everywhere, yes, even in this classroom. Therefore, in all our discussions we must be aware of His infinite presence, and talk about Him, as it were, before His face.”

One thing particularly desirable about the truth is that it can be easier than a lie. A young man was once giving testimony in a lawsuit. One of the lawyers, after questioning him severely, asked, “Your father has been telling you how to testify, hasn’t he?” “Yes,” said the boy. “Now,” pursued the lawyer, “just tell us how your father told you to testify.” “Well,” replied the boy modestly, “Father told me the lawyers would try to tangle me in my testimony; but if I would just be careful and tell the truth, I could say the same thing every time.”

Samuel Butler once wrote, “Any fool can tell the truth, but it requires a man of some sense to know how to lie well.”

Truth gives us something that a lie can never achieve: the peace of mind that comes from doing what is right. Because we are all given a mind that understands right from wrong, falsehood can never cover up the truth.

The Nazi party in Hitler’s Germany proclaimed what it was doing was correct, but hid its actions from the public and tried to hide the evidence of the deeds. Covering the tracks did not change the fact of the misdeeds.

“The liar’s punishment is not in the least that he is not believed, but that he cannot believe anyone else.” – George Bernard Shaw

“In which you formerly walked according to the course of this world, according to the prince of the power of the air, of the spirit that is now working in the sons of disobedience. Among them we too all formerly lived in the lusts of our flesh, indulging in the desires of the flesh and of the mind; and were by nature the children of wrath, even as the rest” (Ephesians 2:2-3).

God: The Only Source of Truth

Whenever I get an email from someone who disagrees with me, the first thing I check for is a scriptural foundation in the email. If you cannot back your beliefs with the Bible, you are easy prey for the devil.

Jesus is the embodiment of truth, which is to say He is the origin of all things and there is no falseness in Him. He didn’t claim to teach a way of truth; he came claiming to be truth. Jesus is the only mediator between God and men.

Only Christ can lead us back to the truth. We don’t need to be ashamed of His guidance because there is no other source that can set us on the path toward eternal wisdom.

To make sure you are absolutely, positively, whole-heartedly right—and not wrong—hold firmly to truth found only in Jesus Christ.