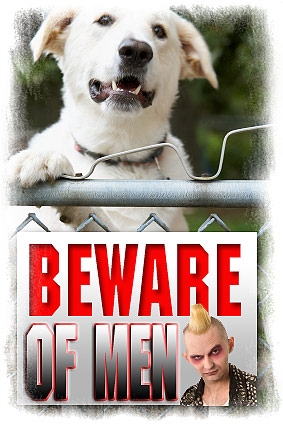 Many of the articles I write for the site are intended to fill an information void I find on the net. I’ll do a search on a certain subject, and if very little is written about that topic, I’ll produce an article to fill that need.

There are 76 million pages that include the phrase, “things to do,” but only 460,000 pages containing the phrase, “beware of men.” Half a million references may seem like a lot, but that is hardly anything when you consider that tens of billions of pages on the net. If you look at the listings, most of the pages are references to a warning given by Jesus:

“But beware of men: for they will deliver you up to the councils, and they will scourge you in their synagogues” (Matthew 10:17)

When I post this article, I’m sure it will eventually rise to the top of the “beware of men” ranking because of the simple fact that it doesn’t have much competition. People love giving advice, but they don’t care to dispense words of caution that might include themselves.

Don’t Trust Anyone with Clay Feet

I was recently going through the process of digitizing my vast collection of audio tapes. I have hundreds of tapes on about every subject one can imagine. While assessing the worthiness of some of these tapes for reproduction, I found myself listening to an old series in which Jimmy Swaggart addressed the gifts of the Holy Spirit. I have about every tape series his produced in his prime, and one of my goals in life is to someday meet the man.

One segment of the tape especially caught my attention. First, Swaggart made a passing reference to Kathryn Kulman, then he spoke glowingly of Oral Roberts, and finally he said he had just returned from a preaching engagement at the church of his beloved friend Marvin Gorman.

I immediately thought this would be a good example to use in some future editorial on why we shouldn’t put our trust in mankind. Every one of these dear saints Swaggart mentioned, including himself, turned out to have feet of clay. The teaching series was recorded sometime in the early ‘80s, and it wouldn’t take long for Swaggart’s words to gain an ironic twist. Here is a brief rundown:

Kathryn Kuhlman is not that well known, but she was the forerunner of many of the questionable faith healers of today. Benny Hinn cited her as a major influence in his life. He has been know to pray at her grave to get her special power.

Oral Roberts made national headlines with a very questionable fund raising ploy. In 1987, he told his audience that he needed to raise $8 million for the medical school that bore his name; otherwise, God was going to kill him.

Marvin Gorman was found to have had an affair with another pastor’s wife. Jimmy Swaggart is said to be the one who exposed him.

Jimmy Swaggart himself was caught in a Louisiana motel with a prostitute. As a retaliatory move, Marvin Gorman hired a private detective to follow Swaggart and take pictures of the tryst.

We should never blindly trust men because the behavior of other people has a profoundly negative influence on our actions. You can preach all the good moral values you want, but one of the most primary rules of life is “monkey see, monkey do.” And suddenly you’re driving down the highway doing 80 miles per hour in a 65 miles per hour speed zone because everyone else is exceeding the speed limit.

On judgment day, God will not allow us to blame other people for our own transgressions. Even if we are the victims of deception, our moral accountability does not change.

We don’t have the option of running off and living in a cave to escape the influence of our fellow earthly inhabitants. We are social creatures, and we depend on one another for survival. The only thing we can do is realize that we need to check the biblical truth of everything our fellow citizens of earth tell us.

The Bible tells us that Lucifer became known as Satan when he grew prideful and organized a coup against God. We are told a third of the heavenly host followed him into a rebellion.

I’ve often wondered how so many angelic beings could be persuaded to join forces with Lucifer. He must have been an incredible salesman to convince them to buy into what would seem to be to a hopeless mission.

We’ll never know the details until we get a chance to ask those who witnessed this event. I suspect one of the key factors that aided Lucifer was the kinship he had with his fellow angelic beings. He was in a position of authority, and they blindly put their trust in him.

Humans aren’t any better when it comes to blindly placing their trust in other individuals. There is a good reason Jesus compared us to sheep. We might all have individual personalities, but when it comes to our social cues, we don’t stray from the herd.

Some of the worst examples of this “follower” trait have occurred on our message board. The board has been part of RR for ten years, and during this time, I have seen several episodes where a key individual or group of people has left the board for various reasons. The regular occurrence of these schisms is the main reason most major prophecy ministries don’t have message boards.

I love getting emails from people who disagree with Rapture Ready. These folks have proved to be very valuable tools for helping me improve the site’s content (not that all negative email is a goldmine of information; most critics have no valid reason for their objections).

One time I received a note from a gentleman who sent me a wonderful outline explaining why there is no God and asserting that religion is a bunch of nonsense. He was obviously wrong, but I marveled at how well written he had made his argument. God had blessed him with a beautiful mind, and it was going to waste.

This gentleman was only disagreeing with me. I wondered about all the men with similar talents, and how they were using their God-given abilities to deceive men.

Some of the most well-known villains of history have been charismatic and gifted with special abilities. Fidel Castro is one such example. He has the gift of gab, and the man could talk for hours about how well the grass is growing.

Castro holds the Guinness Book of Records title for the longest speech ever delivered at the United Nations: 4 hours and 29 minutes, on September 29, 1960. His longest speech on record in Cuba was 7 hours and 10 minutes in 1986 at the III Communist Party Congress in Havana.

Hitler was cruel monster of history, and his name is now synonymous with evil. What is often lost is the fact that he had a natural ability to make people like him. He inspired millions of Germans with the hope of a new nationalGermany. In the end, his charismatic appeal guided many to their death.

We should never judge the value of a message by how well it is conveyed. Because Satan has a proven track record of using gifted people, we should be suspicious of any person who presents an appealing message. Because truth doesn’t need any fancy packaging, God prefers to use people of weaker abilities.

How Great I Art

Arrogance is the best warning sign that someone is a potential source of erroneous doctrine. People who trust their own opinions on all matters are destined for error. Proverbs 15:32 tells us, “He who ignores discipline despises himself, but whoever heeds correction gains understanding. Here is a popular tale that illustrates this point:

An officer in the navy had dreamed from childhood of commanding a great battleship one day. He finally achieved his dream and was given commission of the newest and proudest ship in the fleet.

One stormy night, the captain was on duty on the bridge when he spotted a strange light rapidly closing in on his own vessel. As his ship plowed through the waves, the light rose and fell just above the horizon of the sea. He ordered his signalman to flash a message to the unidentified craft on his port side, “Alter your course ten degrees to the south.”

Infuriated, the captain grabbed the signal light and personally signaled, “Alter course. I am a battleship.” The reply came just as quickly, “Alter your course. I am a lighthouse.”

I have found that the more arrogant preachers are, the less productive they are for the Kingdom of God. There are some men in prophecy circles that I can’t stand to be around because of their pride, and I’ve noticed they tend to be the most error-prone group.

I recently came up a quick test for haughtiness that can be applied to the homepage of any Christian leader. I’m not going to say it’s 100 percent foolproof, but I have found that an egotism level can roughly be gauged by how many times someone’s image appears on their main page. Here is a list I came up with after searching dozens of sites:

I don’t have my photo on RR’s main page because I realize some folks might be reading the site during their lunch break or dinner hour. I also believe that web space is too valuable to be used for anything that doesn’t directly advance the end-time gospel message.

Anyone who thinks he or she is someone special in God’s eyes can rest assured that he or she is not. Because God absolutely hates arrogance, a preacher with an inflated ego will receive only a small reward from the Holy Father.

Jesus Is Your Only True Friend

There is not a single person on planet earth whom we should trust, and that includes yours truly. Everything I post on Rapture Ready is modeled after what God has written in the Bible, so why would you trust a middle man?

I can try to be your friend, but I cannot make any guarantees that I will always act in your best interest. Because all men still have a fallen nature, even the best counsel from men is subject to error.

You can do even worse by being your own friend. We naturally believe our own view of reality, so people who hold to their own opinion in all matters are more subject to deception. This is why a lawyer who defends himself in court is commonly said to have a fool for a client.

The only advice with a proven track record is the wisdom that comes from God. People can disagree with His teachings, but they can’t offer a better set of moral, social, and spiritual guidelines.

Jesus is the type of friend described in Proverbs 18:24: “A man of many companions may come to ruin, but there is a friend who sticks closer than a brother.” He is the friend who has given His life for us.